Are you going to be a victim of the College Dropout Epidemic?

The Answer may surprise you. 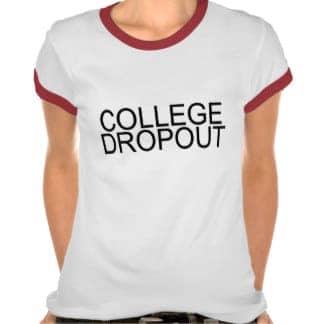 It’s a fact, college dropout rates over the last decade are higher than they have ever been, especially for college freshmen. So, why are students dropping out, what are the warning signs and what can be done to decelerate the erosion of this cornerstone of the American dream?

Dropout Rates (National and International)
Here are some alarming numbers:

44 – The percent of college students who fail to complete four-year degrees within six years.

71 – The percent of students who start two-year degrees and fail to finish them within three years.

78 – The percent of college students who fail to complete a four-year degrees within six years at a private for-profit schools.

Only 35.4% of Massachusetts public college students are earning a 4-year degree within 4 years and only 56.4% within 6 years.

Massachusetts ranks 30th out of 50 states

What do these numbers really mean?

Let’s put these numbers in perspective. Even at a school as prestigious and well known as University of Massachusetts-Boston, it means that of the estimated 1753 incoming freshman from fall 2013, 403 will dropout this year and an additional 684 will never graduate!

That is 1087 real students out of 1753 who will not only fail or give up on their dream, but will also be saddled with their fair share of the average $29,400 in student loan debt without the means to earn the competitive salary to pay it back.

Is college still worth it?
Yes, without question, yes!

According to a recent New York Times article, in 2013 Americans with a 4-year college degree made an average of 98% more an hour than those without a degree. And, that pay gap has been steadily increasing since 1980.

This means while college attendance rates are at an all-time high, the number of college graduates is increasingly below market demand.

Better still, according to a recent paper by M.I.T. economist David Autor, the adjusted value of a 4-year college degree is estimated to be $500,000 over the course of a lifetime.

So, why are college students dropping out?
Numerous studies have been done in recent years, but nearly all cite the following as the main two reasons students give up, give in or get out.

1-Financial Cost or Pressure
Many students underestimate the real cost of attending college. Start with the fact that the average time it takes a student to earn a four-year degree has climbed to six years and four months. Add in the fact that the cost of college has gone up nearly 600% since 1985, the total amount of student loan debt has topped $1 billion, and that 25 percent of student loans are past due and you start to paint a picture of the financial pressures students are facing.

Time has become an increasingly critical factor for success, especially when you consider that the average full-time student only dedicates 3.6 hours a day on educational activities. (That’s both attendance and studying folks!)

How college students use their time each day
And then there’s general preparedness. This from a recent New York Time article:

“Many students are arriving in college without the needed preparation. In 2009, American 15-year-olds scored in 17th place in international reading tests — among 65 nations rich and poor. They scored in 27th place in math and 23rd in science — well below top achievers in other advanced countries. Studies have found that American students are disproportionately disadvantaged, compared with those of high-performing nations on international tests.”

Are you at risk of dropping out of college?
The answer is probably different than you think. Many students think if they can just make it through that first year, they are home free. Unfortunately, it couldn’t be farther from the truth.

Colleges are keenly aware of how their freshman retention rates effect applications and enrollment. In fact, at most colleges, the majority of academic assistance related resources, such as tutoring, are directed towards freshman.

So where do the other dropouts come from? Welcome to the Murky Middle.

According to 2014 article on Inside Higher Ed, forty-five percent of all college drop-outs finish their first year of college, but with a GPA between 2.0 and 3.0. “And at most colleges and universities, academic support goes disproportionately to the students who are thriving, because they seek it out, and to the students on the cusp of failing, because the college sees they’re at risk’” this according to the article’s author.

What this means is many “at-risk” students aren’t asking for or getting help until it’s too late!

How to avoid becoming a statistic?
For many college students the first test results are in. If your exams were not quite what you expected, Quantum Prep recommends you take the following action:

1- Identify your strengths and weaknesses quickly.
Whether their subject, social or financial related, identifying your challenges is the key to developing a strategy to improve your chances for success. Take an honest look at what you have done, what you will be able to do and what is required to be successful now and at the next level.

Because, let’s face it, just getting by is not going to be enough.

2- Get the support you need sooner rather than later.
At this level, you need more than answers, more than grades, you need to learn how to learn efficiently and effectively.

College students are caught in an endless barrage of attention demanding activities. Most are living alone for the first time, carry part-time jobs, have of numerous social obligations and find it increasingly difficult to dedicate the time needed be effective in the classroom.

Think about the increased pace of daily life in general over the last decade. Insta-this and social-that, the modern world is higher paced than ever before. Now, think about combining that with the life accelerating experience of college.

In Conclusion
The days of “just buckle down and study harder” are gone the way of the dodo bird. Time is the enemy and technique your only ally.

You wouldn’t go into a classroom today with an abacus, would you? Of course not. You go with a tablet or laptop. So why employ antiquated study techniques to tackle today’s academic challenges?

If you find yourself heading towards the “Murky Middle,” contact a skilled education professional who can help you to evaluate your strengths, identify your challenges and create a learning plan to get you on your feet and prepare you for success now and in the future.

Founded by veteran educator Solomon Berman in 2011, Quantum Prep is a Boston-based, privately held education service provider delivering personalized, one-on-one tutoring, test preparation and college admissions consulting to high school and college students in Massachusetts, New Hampshire, Rhode Island and Connecticut.Quantum Prep’s unique programs are developed by experienced, professional educators working together as a community to mentor and challenge students of all levels to reach their academic potential and achieve both their short-term and long-term educational objectives. As a program developed solely by educators and with a focus on STEM (Science, Technology, Engineering and Mathematics) education, Quantum Prep’s highly qualified instructors boast some of the industry’s best student achievement rates.

Thanks to my Quantum Prep tutor I was able to grasp and understand the material, excelling past many of my peers (and occasionally my professors)...
"I've never met someone who knows so much about anything, like if i needed help in any subject he was there for me."
The outcome I think has been terrific. Quantum Prep offers not just a targeted way of tutoring, but an entry into a intellectual universe that's very high level. We see nothing but improvement and really really positive outcomes at this point.
During my months of tutoring, I was able to retain information and everything that was taught in high school was coming back to me...
Our Quantum Prep tutor deconstructed many of the math questions and provided unique test taking strategies. But most of all, our tutor trained my son...