Quantum Prep Teacher of the Month 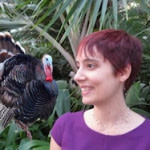 April has a Master’s degree in astronomy from Boston University and Bachelor of Science degrees in physics and astronomy from the University of Minnesota and has been teaching at the university level for nearly a decade.

Q: So April, when did you discover your passion for teaching?

A: For me, it’s always been a natural thing to teach. When I was in grade school, I would help teach arts and crafts projects to my friends in girl scouts. When I was in high school, I had a friend who couldn’t seem to pick up algebra from our math teacher, so I taught it to her. After a while, our teacher didn’t even mind us whispering in class – we were always talking about math!

I took physics a year before most of my friends, so I ended up helping out with that, too. I like explaining things, and seeing someone go from not understanding to understanding.

Q: Why did you choose to focus your education and career on physics and astronomy?

A: When I got my first pair of glasses in fifth grade, I suddenly realized I could see the stars again. At that time, I decided I wanted to study the stars and understand all I could about them.

In high school, I knew I needed to take physics in order to do astronomy, but I was worried about it. I kept hearing people say how hard it was and how much trouble they had with physics. I decided to give it a try anyway, just the first year, and keep an open mind. I didn’t have a bad time, and actually thought it was okay. Then I took AP physics, and I really had fun with it – especially the labs.

Q: Who was your favorite teacher or professor?

He told you exactly what you needed to do at the beginning, and he really did grade everything exactly as he said. The tests and labs were always just what he told you they would be. He also had an interesting sense of humor.

He was the only physics teacher at the school, so he did the same class five or six times a day, and he had worked very subtle jokes into the material. If you weren’t paying close attention, you wouldn’t even notice the joke. One of my friends and I did notice, and he noticed that we noticed, so it was a fun time. Paying really close attention is a pretty good way to learn the material, too, so we did well. I could go on, but the main things I learned from him were about encouraging people indirectly and keeping an upbeat attitude.

Q: Why do you think people struggle with physics and astronomy?

A: Physics is taught as much as a way of thinking as a series of tasks to master. Astronomy is very similar. They want you to have a very particular way of approaching problems and a very systematic way of applying what you know to a new situation.

If a student comes into physics without that mindset, then they have twice as much to learn. A lot of people want to apply a formula or use a well-practiced skill when they encounter a problem, especially on a test or another higher-pressure situation, but that doesn’t always work well in physics.

Many physics professors, being the sort of people who took to the physics mindset easily, make it very hard on people who don’t pick up the mindset. I often hear people say “the test was nothing like the homework” or “we never saw this in lecture.” Most of the time, the professor was testing physics thinking as much as memory and preparation.

Q: What impact do you think your tutoring has on your students?

A: In addition to improving grades, I think my tutoring helps students learn a more systematic and rigorous approach to their work. In other words, the physics mindset.

I know things are going very well when students start saying “my answer doesn’t make sense.” You need to have a good understanding of the material to know what to expect in an answer, and a careful mindset to go back and check. Those skills can be applied to many other classes, and I make them as much a part of my teaching as the specific course material.

Q: Tell us about the student engagement you are proudest of.

A: Sometimes as a teacher, you have to teach things outside of the course. Sometimes some life coaching is involved.

I had a student who was doing well in her physics class thanks to a lot of hard work together, but towards the end of the semester she was having a tough time managing the stress and all the demands on her.

I presented a variety of simple exercises and stress management techniques, and we spent a lot of time and emails talking about how she could approach things. I saw a big change in her as she started to apply what we had talked about, and it really felt like she had ended up with more tools in her life skills toolbox (in addition to knowing more physics).

Q: Why did you decide to teach at Quantum Prep?

A: I have a long-standing interest in educational methods and best practices. In fact, during my time at Boston University, I helped to organize teaching forums and workshops for graduate students from across New England.

I am also a firm believer in the ability of every student to succeed and in the necessity to customize and tailor instructional materials to each individual student’s strengths.

Solomon and the Quantum Prep teaching staff support these beliefs in everything they do. It is a true community of educators working together, teaching not only our students, but each other on a daily basis.

And besides, who wouldn’t want to work with Solomon?

Annalisa DiVito is an Associate Director of Marketing at Quantum Prep. She is a recent graduate of Emerson College in Boston, MA where she received a B.S. in Marketing Communications. She is passionate about education and someday hopes to change the world!

Thanks to my Quantum Prep tutor I was able to grasp and understand the material, excelling past many of my peers (and occasionally my professors)...
My grade went from an F to a B and I came away from the course actually understanding the material...
The results spoke for themselves: Chloe's initial C-range grades rose to A-minuses in both courses within one semester, undoubtedly contributing to her eventual college acceptance by Columbia and five other top schools...
Quantum Prep rocks! I honestly do not believe my daughter would have been able to complete the coursework required of her without your help.
My Quantum Prep tutor was able to find out what methods were best for me and taught me the material in a way that I could understand...