The existence of pi pie a special geometric ratio, what we all know is “pi,” has been known since Antiquity.

The Great Pyramids of Giza were built with the ratio of two times pi incorporated in them. There are writings going back to 1900 – 1600 BCE that shows that the Egyptians and Babylonians knew of the special ratio. In India, Sanskrit texts made mention of the ratio as far back as 600 BCE. Even the Hebrew Bible describes the ceremonial pool of King Solomon (my namesake) as having a diameter of 10 cubits and a circumference of 30 cubits. 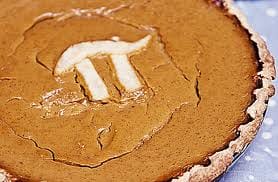 Interestingly, the name of the ratio, “pi,” did not appear until the early eighteenth century. William Jones, a mathematician, made mention of the phrase, “one half Periphery (pi)” in his discussion of a circle with a radius of one.

The name was not truly adopted until the mathematical giant Euler started using it, beginning with his 1736 work Mechanica. In 1748, Euler wrote in his work Introductio in Analysin Infinitorum, “For the sake of brevity, we will write this number is pi; thus pi is equal to half the circumference of a circle of radius one,” and thus pi’s name was entrenched in the Western World.

So, what is pi, exactly, besides a Greek letter or a button on a calculator?

As the ancient Jews, Egyptians, Indians, and Babylonians discovered, is a consistent ratio between the circumference of a circle to its diameter. Many of us know it is a 3.14, but it is a decimal that never ends, and does not have any repeating pattern, to the point where the digits are just randomly distributed.

Many people have tried to accurately compute pi, from as early as Archimedes, who employed painstaking geometric means, fitting the circle into a polygon up to 90 even sides, and computing the perimeter, to the supercomputers of today, which have computer nearly 10^13 digits after the decimal point.

Though we can use pi to calculate the circumference (pi*d), the area (pi*r^2), or the volume of circular objects (volume of a cube is 4/3*pi*r^3, or a cylinder pi*r^2*h), pi appears in many other areas of mathematics.

Sines and cosines in trigonometry employ a unit of pi radians, harking back to the unit circle in polar coordinates where we find the values of trigonometric functions. Gauss, another mathematical giant, used pi in the famous bell curve that we see in statistics to describe many distributions of data, including grades in schools. And physicists use the constant to calculate the period of a simple pendulum or the amount of force two charged particles exert on one another.

So the next time someone tells you to take it easy on the pie over the holidays, you tell them how important pi is for all of us. Tell them it’s only fitting that you pay homage to pi and try to eat at least 3.14 slices.

See you in January for our special on curves and mass. Happy Thanksgiving!